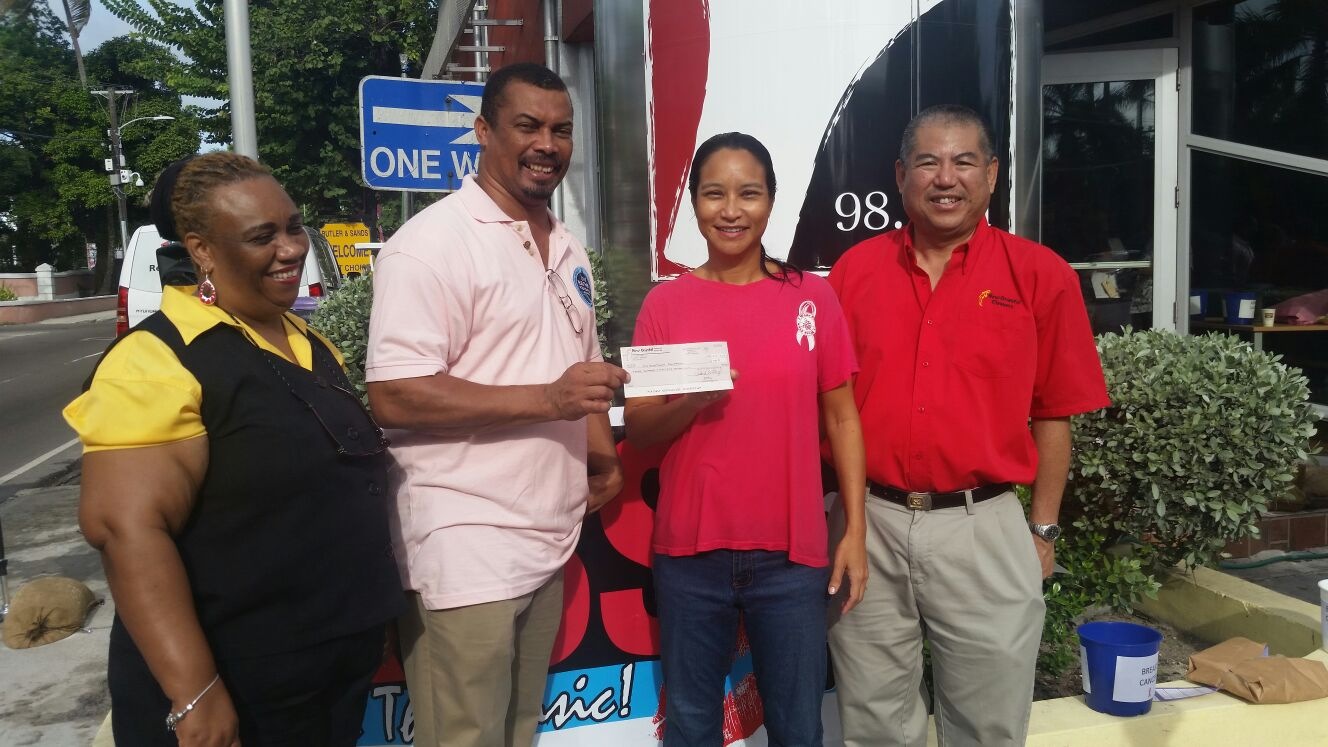 RADIO House yesterday raised over $5,000 from its second annual Dunkin’ for Boobies event, an initiative aimed at promoting breast cancer awareness in the Bahamas. For four hours from 6am yesterday, corporate figures and radio personalities took a watery plunge into a dunking tank in front of Radio House on Shirley Street as work colleagues and listeners to the morning shows on 100 Jamz, Kiss 96 and Y98 pledged funds towards the advancement of breast cancer awareness and the fight against breast cancer.

The morning shows on the three stations were broadcast live until 10am from the front of Radio House, where passing motorists gave donations. The crew at Radio House was assisted yesterday morning by breast cancer survivor Melissa Major as well as its partner in yesterday’s initiative, the One Eleuthera Foundation, which provided volunteers to collect money from passing vehicles and pedestrians.

Additionally, kind-hearted students from the Bahamas Global Academy not only donated their lunch money but also assisted in collecting donations. The total donated yesterday was $5,281.

The single largest donation came from the 1 on One Pre-school, which held its own fundraiser and raised $800 that they subsequently donated to Dunkin’ for Boobies.

Shaun Ingraham, CEO of One Eleuthera, said he was “really happy” about the support the Foundation was seeing. “A lot of people I know are anxious about the oncoming hurricane, but people are still very generous in their gifts and everything else,” he said. “But this is going to help us expand our programme.” Mrs Major added that as a survivor of Non-Hodgkin Lymphoma, a cancer that originates in the lymphatic system, seeing the “entire cancer community succeed” is something on which she thrives as a cancer survivor.

“I’m a woman and I have a daughter and I have a mommy, so Breast Cancer Awareness Month means everything to me, because the statistics that we have are just beyond alarming,” she said. “It’s not the number one killer of women in the Bahamas, but definitely it’s killing our women slowly.

She added: “I love working with Radio House, Ollie (Ferguson), JJ (McKenzie), the entire team here. It’s been absolutely awesome and they’re always awesome to get the word out to educate, to inform and to empower women to just do what they need to do to take care of themselves.”

Delmaro Duncombe, Sales and Marketing Manager of Generali Worldwide, called it a “joy” to take the plunge in support of “breast cancer awareness and the breast cancer initiative.”

“Cancer is a disease that is plaguing our Bahamas, and so at Generali Worldwide one of our core values is living the community,” he said. “We know the importance of being a good corporate citizen and so we are just doing our small part to show that we do care and we do have the victims of breast cancer in our hearts and so we support them whole heartedly.”

Lana Lee-Brogdon, representing both New Oriental Cleaners and Wok and Roll, said she has “no problems getting wet for the breast cancer research cause”. “It’s touched so many lives in the Bahamas and so many of our team members and also myself and my family members,” she said. “So (the water) is cold, but it’s for a good cause. So I have no qualms doing this again.”

Afterwards, JJ McKenzie, Director of Promotions/Online Marketing at Radio House, said she was “thrilled” to see the “overwhelming support that our listeners showed us through donations and volunteering”. “So many Bahamians have been affected by breast cancer in some way,” she said. “Nassau opened their hearts and wallets and it was also lovely to see breast cancer survivors pass through and share their stories and take part in today’s event.” “Thank you to all the companies and businesses who took part and dunked their boss. We hope next year your boss will be nominated to go in our dunkin’ tank and go Dunkin’ for Boobies.”

No comments to show.